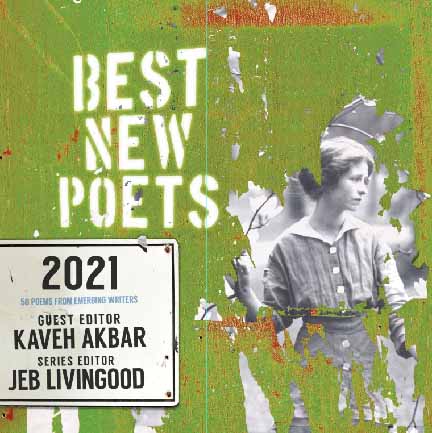 Best New Poets is an annual anthology of fifty poems from emerging writers. The anthology began in 2005 under series editor Jeb Livingood with George Garrett serving as the first guest editor. Our audience has grown over the years, in large part due to the efforts of Jazzy Danziger when she served as series editor from 2011 to 2015, and the book is currently distributed nationally as a University of Virginia Press title and produced in cooperation with Meridian, an annual literary magazine from the University of Virginia.

Bookstores and other outlets interested in stocking Best New Poets can place orders via Longleaf here.

All entries go into a single anonymized pool where readers rank the submissions. A finalist pool of 150 to 300 poems then goes to a guest editor for review, and that guest editor selects the final fifty poems for the book.

Jeb Livingood will continue as series editor in 2022. Our 2022 guest editor is Paula Bohince.